The corps was set up in 2018, but the service of its members goes way back before then! The Corps founders, Terry Shaw and Dorian Belt have decades of musical service under their belts.  The founder members of the Corps have all played for Brass and Military bands prior to setting up Cheshire Drums & Bugles. Terry has played for some of the most prominent brass bands in the North West on Cornet and Dorian played for a well known Corps of Drums for many years.

The Corps grew in stature and size and performed with Warrington Brass in the Whit Friday Marches , the worlds premiere  Brass Band Marching Contest in 2018 and from then we played for many bands across East & West Cheshire. The corps performed on its own as part of concerts and as an integrated part of the concert. In  the November of 2019 we managed to fund our new Dress Uniforms, and we paraded with Crewe Brass  on Remembrance Sunday 2018 for the first time.

In 2019 we joined up with Barnton Silver Band for the Whit Friday Marches and we beat some of the best bands in the country to win a number of deportment prizes. We have expanded our area to include jobs in Manchester and Merseyside.

The corps Drum Sgt, Rob Richardson, has arranged and composed many drum solos, drum statics and corps of drums parts to accompany brass and military band pieces in concerts. The other members of the corps have experience of playing with Corps of Drums from across the musical & military spectrum, from Boys Brigade, Scout Bands and Brass Bands, we have experience and knowledge to suit any occasion.

After being very involved in reforming the Macclesfield Town Band, Terry was also invited to join Thornsett Band (conducted by Brian Taylor, Fairey Aviation Band). Terry also assisted numerous other bands in the High Peak Area (Chapen en le Frith, New Mills Co-op, Whaley Bridge etc).  After a break playing with a group, on Bass Guitar and Trumpet, he came back to banding initially helping various High Peak bands before joining Burbage Band ,Buxton (conducted by the great character Don Redfern with George Thompson of Grimethorpe as musical advisor). After a number of years Terry, was invited back to Berisfords (now conducted by Granville Jennings again of Foden's).

After another break from banding Terry was persuaded by his great friend, the late Jim Genders, to join the Cheshire Constabulary Band and help with the re-building with Nick Hudson of Foden's conducting, he remained with them for many years under various conductors, including teaming up once again with Charlie Holt. During his time there he also played with the Corps of Drums including two highly successful tours of Germany, finally in 2018, forming Cheshire Drums and Bugles.

Like many people of his generation Dorian started playing in bands at an early age as a Cub Scout at his local scout group. He was given an old, dirty, dented brass bugle to the pleasure of his parents but Dorian soon started to control the noise and string together a few notes to form some sort of tune and he also got it looking a lot cleaner.

Over a period of time Dorian became an accomplished bugler with his local scout group (20th St Andrews Macclesfield) and he took part in many parades usually church parades, civic events and carnivals.

From there Dorian joined the Cheshire Constabulary Corps of Drums as a bugler where, alongside the bugle, he was soon given a Tenor drum to learn. He soon progressed to become a snare drummer & bugler which enabled him to play both instruments at ceremonial, civic and public events. Dorian is particularly proud to have enlisted his daughter, Lauren, into the Corps too, herself an accomplished Clarinet player, she took to playing the Tenor Drum with ease and soon had the flourishes and butterflies off to a tea.

Dorian with fellow band members have played at many venues around the UK and on three occasions had the pleasure of performing at the  European Brass Music Festival in Bad Schlema, Germany. This event is attended by over 8,000 brass music enthusiasts over a 3 day period and performances go on well into the night. The highlight was the first time the crowd saw the Corps of Drums as they marched out to a massive German favourite “Altern Kamaraden” and they loved every second of the corps display.

Rob started playing late on at high school and soon found his niche on Drum Kit and SD. After playing for the Co-op Youth Band he jumped straight into the Championship section with Greenway Selectus (under Alan Brotherston, of Fodens).  After a decade with Greenways Rob went to Normid 2000 under Dave Newton (also of Fodens) and spent many happy times there before again going into the championship section with United Co-op (Crewe) under Jef Sparkes (another former Fodens player)

After 12 years with United Co-op Rob joined the Cheshire Constabulary Band and had 11 years with great success gaining promotion from the 4th to 2nd sections. It was there that Rob fell in love with playing with Corps of Drums. He also played for West Yorkshire Police Band and received a Chief Constable's Commendation for services to West Yorkshire Police and to the Band.

He introduced the Corps of Drums to WYPB and was instrumental in them teaming up with West Yorkshire Police Band and getting them to Ypres and Normandy for the Remembrance and DDay Commemorations. He rejoined Crewe Brass in 2018 and then Cheshire Drums & Bugles. Rob led the Band of Liberation at the 75th Anniversary of DDay and has a strong close relationship with them.

Rob, besides being Principal Percussionist with Crewe Brass, and lead tipper with Cheshire Drums & Bugles, also plays for the Royal Welsh Regiment Corps of Drum.s based in Hightown Barracks, Wrexham. They along with the Band, have the honour of playing at the Millenium Stadium for Wales Rugby matches.

let the drums beat and enrich your soul 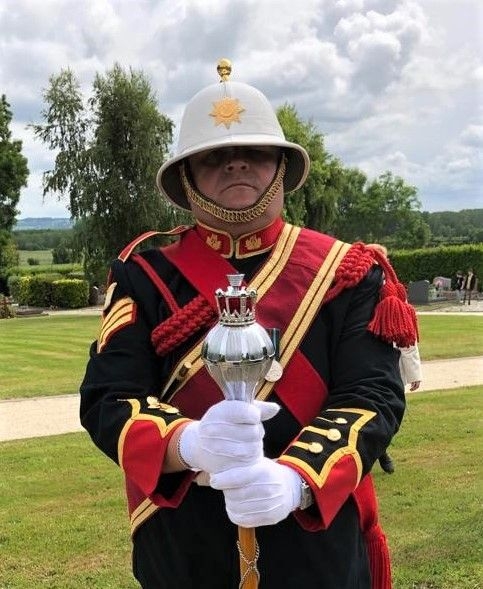 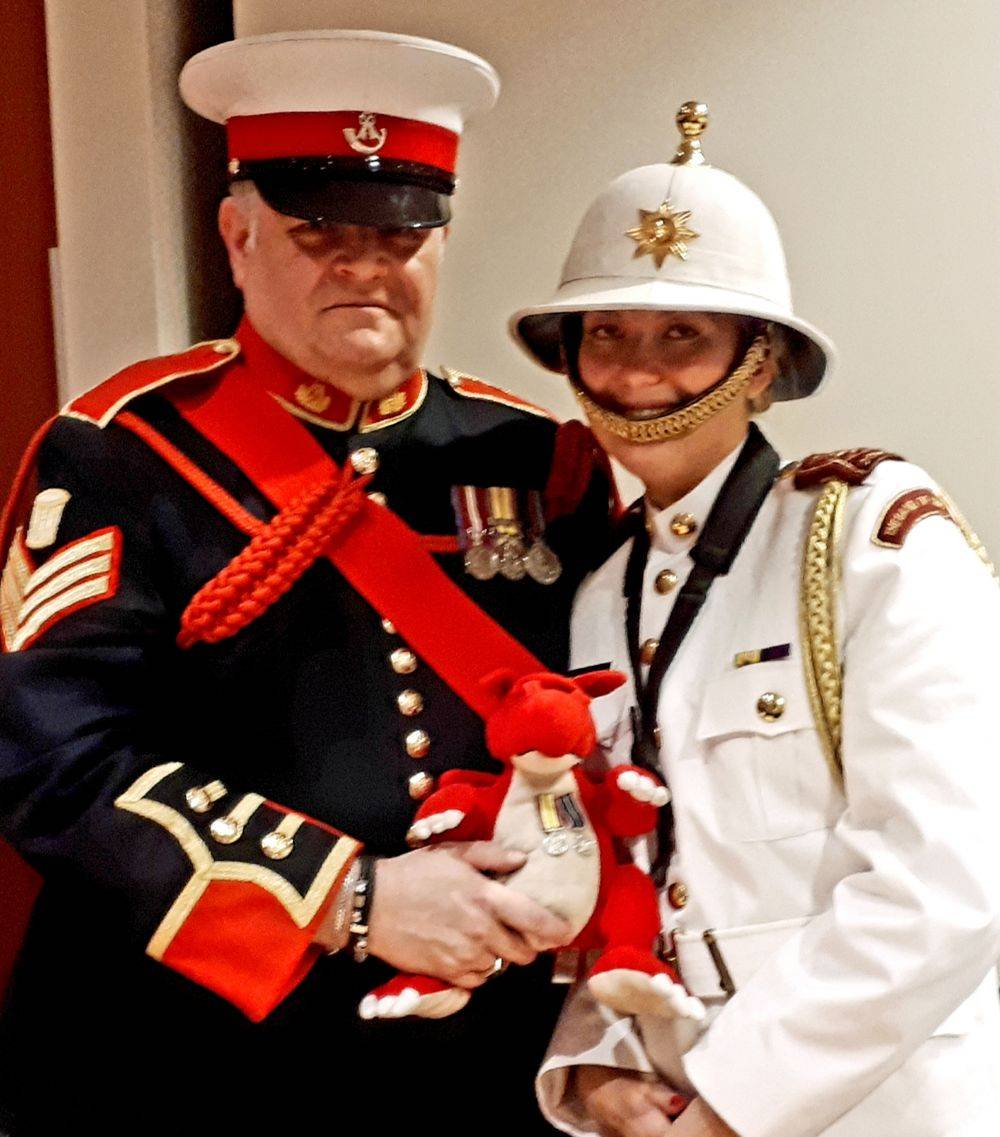 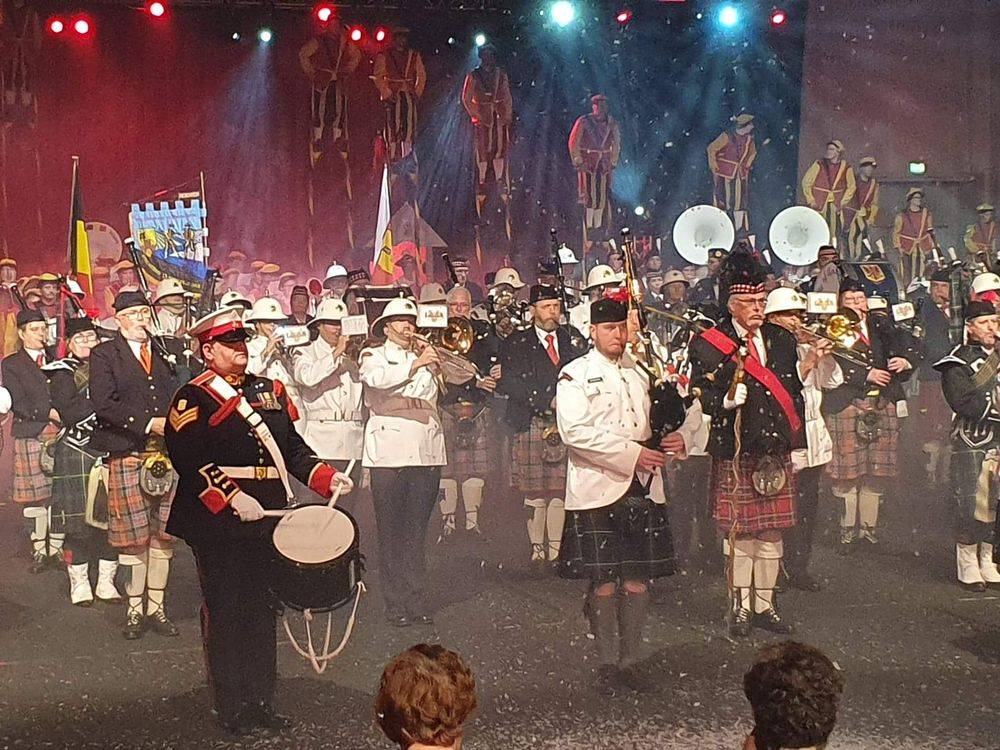 Our Drum Sgt, Rob Richardson, through his contacts with bands across Europe, was asked along with Drummer Sam Stanley, to lead the Band of Liberation as Drum Major at  the DDay Commemorations in Normandy. The band were based in Benouville the village made famous for Pegasus Bridge and being the first village liberated in France on 6th June 1944.

The Band of Liberation come from Leiden in Holland and later that year Rob was asked to reprieve that role at the International Christmas Military Tattoo in Leiden.

We now rehearse at Whitegate CE Primary School, we have the playground for outside rehearsals and the School Hall as a Drill Hall ! It's absolutely perfect and we are so grateful to the staff and governors at the school.